Ahmet İzzet Bengüboz and the Importance of His Photography Collection:

Mudurnu has a unique and extraordinary photographic heritage in connection with the events that took place as a result of the First World War. Ahmet İzzet Bengüboz learned the art and technique of photography in a British war camp where he was held captive; When he returned to his hometown, he was a Mudurnu citizen actively practicing this new art. The glass plates he produced mostly between 1923-39 are estimated at several thousand, of which 1,018 have survived to the present day. This special photography collection which is donated to the Mudurnu Public Education Center by his grandson Mehmet Kadri Bengüboz has a high artistic success that sheds light on the urban history of Mudurnu by providing uninterruptedly evolution of the social life in the city during the first ten years of the Republic of Turkey. The photographs are used in many public places in the Mudurnu, including public places, hotels and restaurants.

Bengüboz’s photographs are significant in terms of technological and social history, exemplifying the technology transfer from an industrialized between European country and a small city in Anatolia the deep socio-political turbulence brought on by the First World War. A preserved local archive and Mudurnu documentation shaped by this technology; With its natural architectural beauty and human portraits, it shows that Mudurnu, which has rapidly adopted the modernization attempts of the Republic, is a settlement with a high education and cultural level. Bengüboz’s photographs present a rare collection of documents that were inherited from his ancestors and preserved to this day. It is even more valuable given the scarcity of museums or archive areas where so much content can be collected outside of the big cities in Turkey. Rich collections of local photographs can be found in the Ottoman and Early Republican Periods, often alongside those associated with Istanbul. Like the Bengüboz collection, these collections are valuable in that they depict social and cultural life in small-scale Anatolian cities – especially daily life, family, holidays, important events, ceremonies, perspectives of the inhabitants, etc.

Ahmet İzzet Bengüboz’s photography collection, which is an important document that sheds light the way for the social life of a period, was presented to the public again in 2016 with the exhibition and book project titled “A Witness from Anatolia: Early Republican Period in Mudurnu Through Bengüboz’s Perspective”.

​​The exhibition, curated and edited by Ayşe Ege Yıldırım, was held simultaneously with the 40th Session of the UNESCO World Heritage Committee in Istanbul. The book of the same name, prepared as part of the exhibition project, can be purchased from Yapı Kredi Publications. 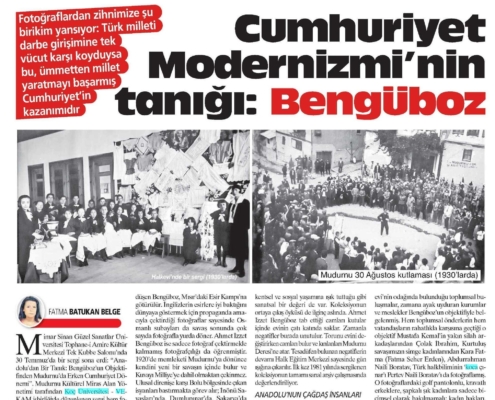 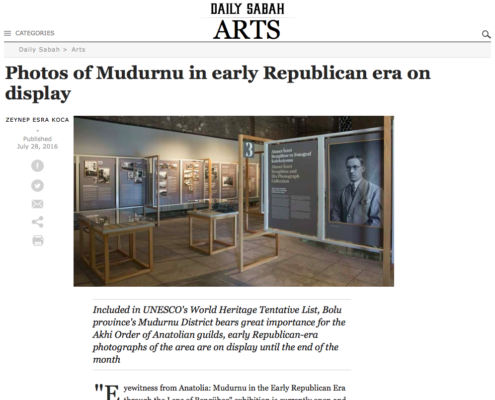 A small selection from the collection:

The virtual archive, which includes 260 pieces of the photographic collection on display, was available at www.mudurnukentarsivi.org between 2016-21. We also share some photos from this collection on the Terra Mudurnu website; You can browse the photos from the menu below. You can apply to the Mudurnu District Governorship to use high resolution image files for a royalty.